Sabine Buis, Where the public and the private sector meet – Entrepreneurship “Makers Bridge”

After a career in teaching and politics, Sabine Buis is now an entrepreneur. Her project helps the private and public sectors to meet, providing a service for French regions, an idea that makes particular sense in times of health crisis. 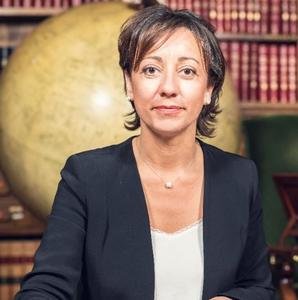 Be an agent of change. What Sabine Buis wants to do is very clear, and it can be felt throughout her career. She started out teaching economics and social sciences, working with young people was her job for about twenty years. She then moved into politics and in 2010, she became a Regional Councillor, then a member of Parliament. “I've always wanted to convey my values. Being committed is important to me. That's why I went into politics. Today I am still vice-president of the Ardèche departmental council,” she says.

This career in politics brought her into contact with many companies and executives. She shares their problems and needs, and sees the need to create a link between worlds to accelerate the development of towns, departments and regions. “As a member of Parliament, contractors would ask me for appointments. They needed to know my vision as an elected official. I found this collaboration worthwhile and conducive to collective intelligence. There was something to be built around it,” Sabine Buis recalls.

The big leap into the world of business schools

At the end of her mandate, she decided to train and became interested in MBA programs in business schools. This was a real discovery for Sabine Buis, who was not familiar with French grandes écoles. She chose emlyon business school’s Executive MBA following an extensive round of benchmarking. “The innovative teaching promoted by emlyon business school was close to my heart. I also chose to stay in the Rhone-Alpes region because of the dynamism of the Lyon area,” says Sabine Buis.

Meeting people, soul searching, quality teaching... the EMBA lived up to her expectations. The former MP emphasizes the wealth of experience of her peers and the warm welcome she received for her background, which she thought was atypical in the business school sector. “The lecturers are all really very good. The classes were captivating. I was able to learn more about finance, digital tools, change management... I also learned the language of general management”, says Sabine Buis.

Sabine Buis quickly understood that her future lay in entrepreneurship. So she chose the Makers Bridge Entrepreneurship course. This specialization, offered as part of the emlyon business school EMBA, allowed her to go deeper into her project and express it clearly. “I had identified what was missing from my career and my idea. This Makers Bridge course has helped me to build my offer, structure it and test it. I was able to submit it to other directors throughout my course”. Her entrepreneurial spirit asserted itself and she set up her company during the course, with the help of Michel Coster, an entrepreneurship professor and director of the emlyon accelerator. Her company, Calade, provides support for private and/or public stakeholders and promotes collective intelligence for the energy and ecological transition.

She is called upon by local authorities wanting to develop a more ecological public policy and who do not know how to go about it, or with whom. “Turning policy into action is not easy. The right partners need to be identified, and we have to make sure that local businesses can find their place to turn ideas into action,” explains Sabine Buis.

Companies also use Calade to initiate environmental transition arrangements or to market their products or services to local authorities. They need a mediator, someone to understand the needs and expectations of the political world.

Calade has become the meeting point between two worlds. Just like its director, who is both a politician and an entrepreneur. One more way to get involved and help others.