Meet Vineet Nayar - Inspired Leadership, What does it take ?

Meet Vineet Nayar - Inspired Leadership, What does it take ? 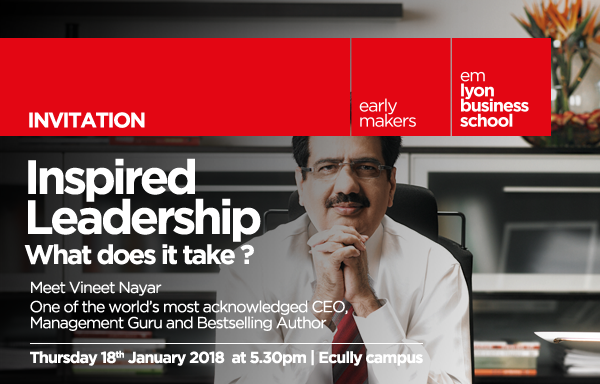 Seize the opportunity to meet an innovative and inspiring early maker, who has turned conventional management upside down with his highly acclaimed management book "Employees First, Customers Second".

On this occasion, he will give a conference on the topic

Inspired Leadership
What does it take ?

And will touch on the following: How to become an inspiring leader ?
How to motivate your staff during a crisis ?

Following the conference, you will be given the privileged to meet Vineet Nayar in person during the signing of his latest book release “Employees First, Customers Second”. Book also available for purchase.

The conference will be conducted in English.

Vineet co-founded Sampark Foundation with his wife, Anupama Nayar. Today, Sampark Foundation is transforming learning outcomes of 7 million children studying in 76,000 schools in Uttarakhand, Chhattisgarh and Jharkhand; making it one of the world’s largest primary school transformation initiatives by a Foundation. Forbes in its ‘Heroes of Philanthropy List 2016’ has cited Vineet for this ‘Innovation led large scale social change’. He was recently featured as a ‘Global Thinker 2016’ by Foreign Policy magazine for ‘unplugging technology so kids can learn’ along with his wife.

Vineet is also an acknowledged management visionary and a radical thinker who architected HCLT’s transformation from $0.7 billion in 2005 to a $4.7 billion Global Technology Services Company with over 85,000 employees across 32 countries in 2013. This radical transformation led Fortune to recognize HCL as "the world’s most modern management" while Business Week named HCLT as "one of the world’s most influential companies"; which led HCL’s innovative management practices to be taught as a case study at both the Harvard Business School and London Business School.

Vineet was also chosen by Fortune Magazine for its first ever, global "Executive Dream Team" 2012 which has been described as an "all-star leadership" that "could coalesce and dominate in any industry". This is in addition to his inclusion in the elite "Thinkers 50 List" in 2011-12, which is a definitive listing of the world’s top 50 business thinkers. His ideas of organization transformation have received rich praise from influencers like the late C.K. Prahalad, Tom Peters, Gary Hamel and Ram Charan.
Vineet currently serves as a Senior Advisor to the McKinsey Leadership Institute and Fortune 1000 companies. He also mentors 18 technology lead stratups and is on the Advisory Board of the Millions Learning Project led by the ex-Prime Minister of Australia, Julia Gillard. He is also the Founding member of Brookings India and has been a Juror of Harvard Business Review’s prestigious McKinsey Prize. Previously, he has served as Governor of ICT, member of the Global Advisory Board of Women Leader's and Gender Parity Program as well as a Community Partner of the Forum of Young Global Leaders at the World Economic Forum. Vineet has been a "Mentor" (Co-Chair) of WEF’s 2011 AMNC Conference.

He joined HCL in 1985 after earning his MBA from XLRI. In 1993, Vineet founded Comnet and helped it grow into a $1.4 billion dominant leader in Technology Management Services. In 2005, Vineet became President of HCL Technologies and served as the company's CEO from 2007 till January 2013.

Find further information about Vineet Nayar on this website :  http://www.vineetnayar.com/

With the partnership of the forum student association, emlyon business school